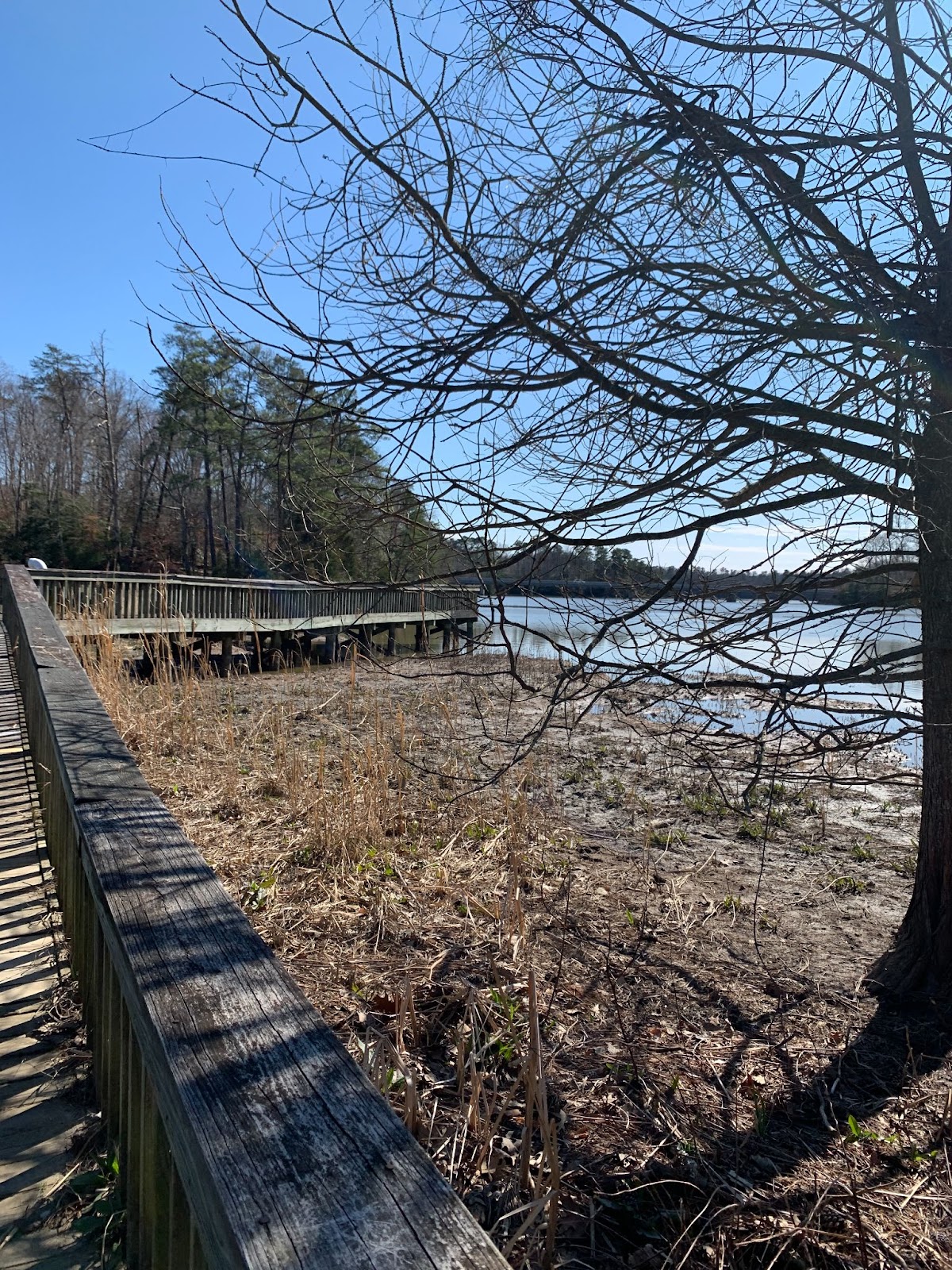 College Landing Park is located just off South Henry Street in Williamsburg, VA. Upon arriving, one enters a parking lot facing a body of water (College Creek). There is a wooden bridge (pictured above) which allows visitors to get a better view of the riverbanks as well as the muddy waters below. 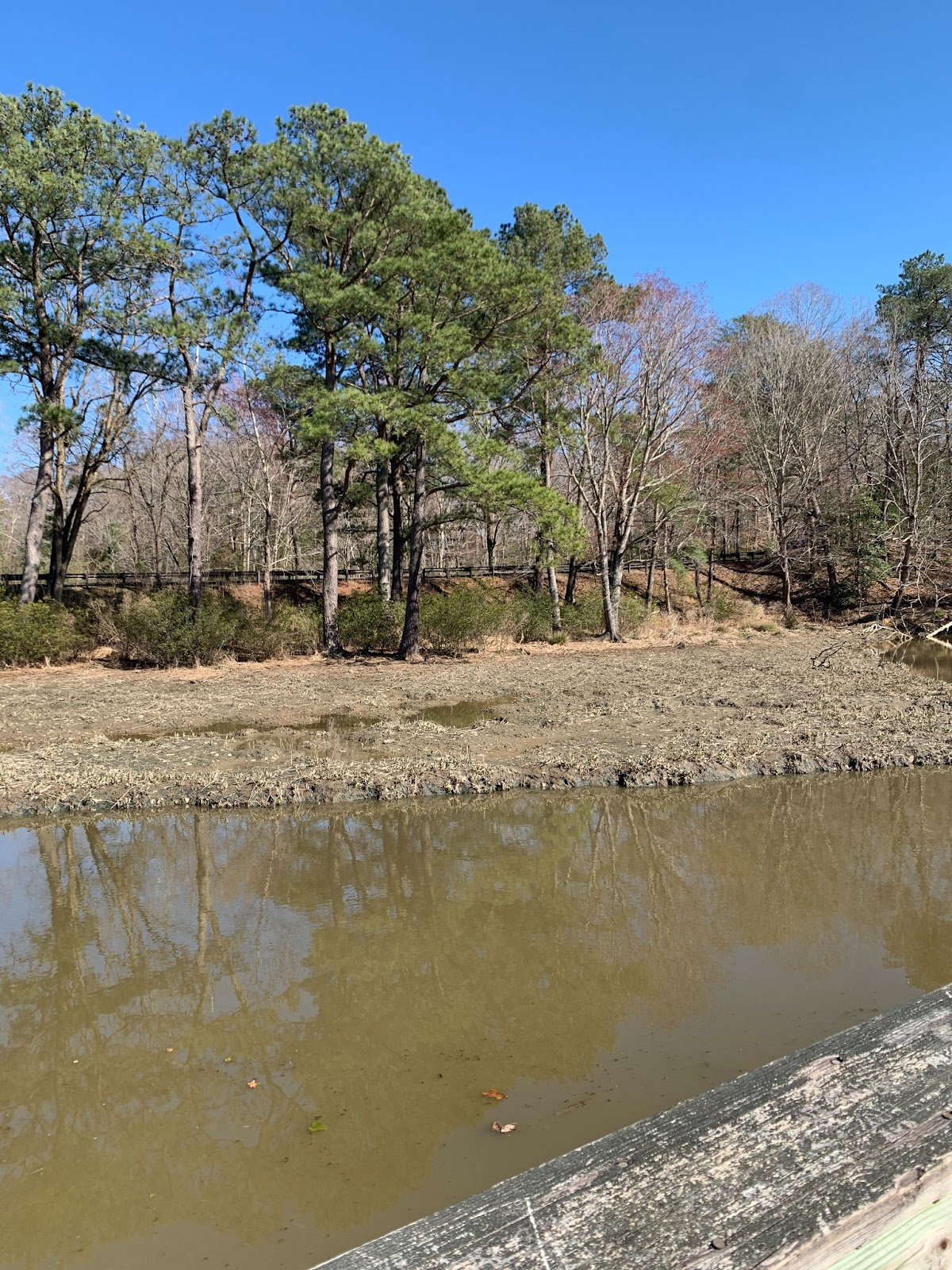 The main road is near the water, allowing for runoff, salt and other pollutants to flow into the water. Litter in the park is fairly limited, with plenty of waste bins around the area. There is visible litter in the murky water, with small, little fish swimming around. The vegetation appears to be wiped out. While in attendance, a crane perched itself on the riverbank. If there is any question of human activity, one simply needs to look down to see the hundreds of carvings along the railings of the bridge. 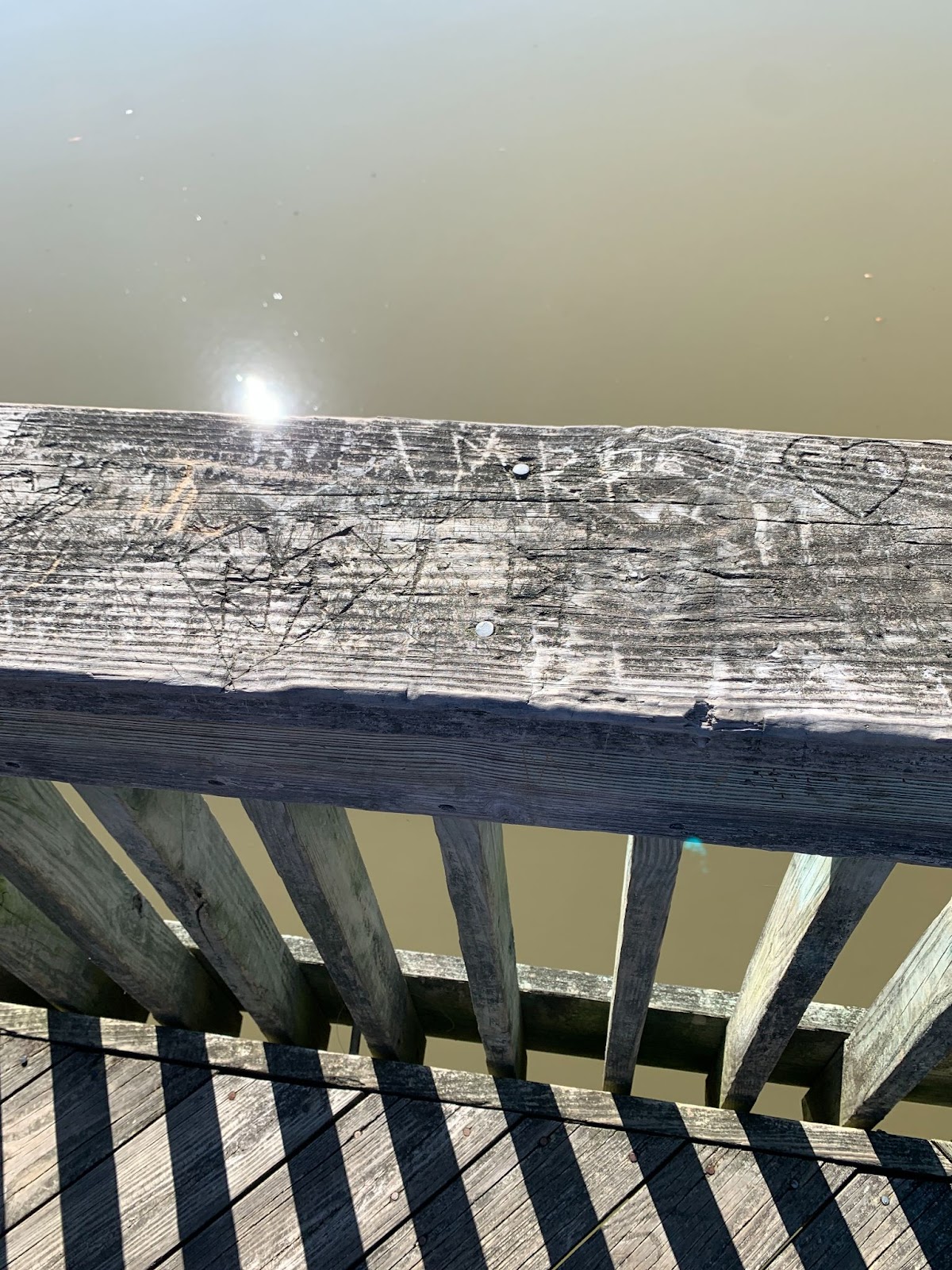 On both sides of the water, roads pollute the environment with constant traffic noise of passing cars. The park itself feels like a sort of afterthought– a space between two highways that happens to host limited wildlife. However, it seems little energy or resources are being put in to maintain the health of the wildlife in the park. The creek is separated from its feeder waterway by roads built up on land. 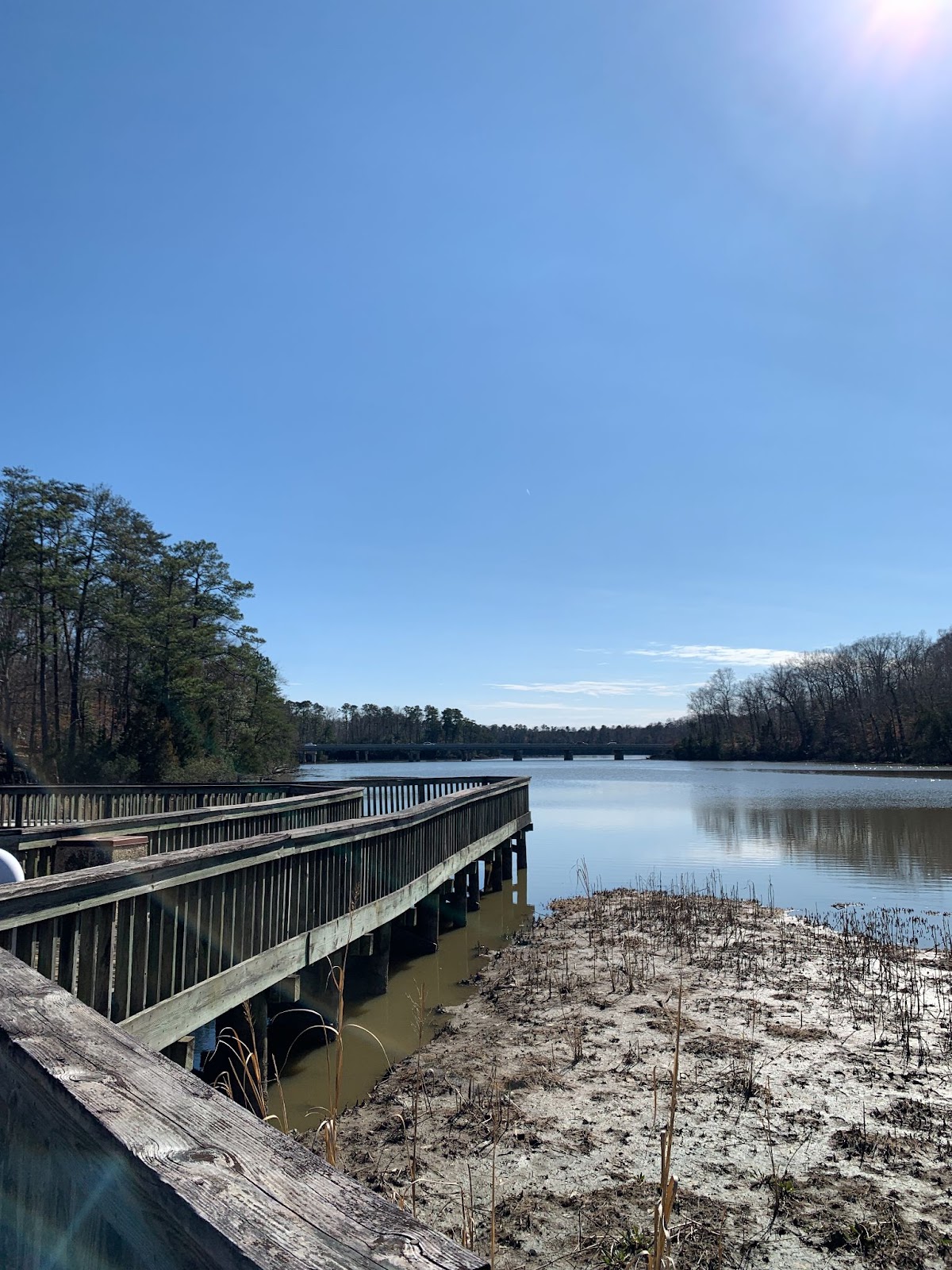 Despite this, wildlife finds a way to persist. Baby bass swim around tiny pools left in the mud. Ducks and geese paddle along the waters. Weeds grow from the cracks in the pavement of the parking lot. As always, nature fills the niches available to it– even in a park dominated by a colonial narrative. 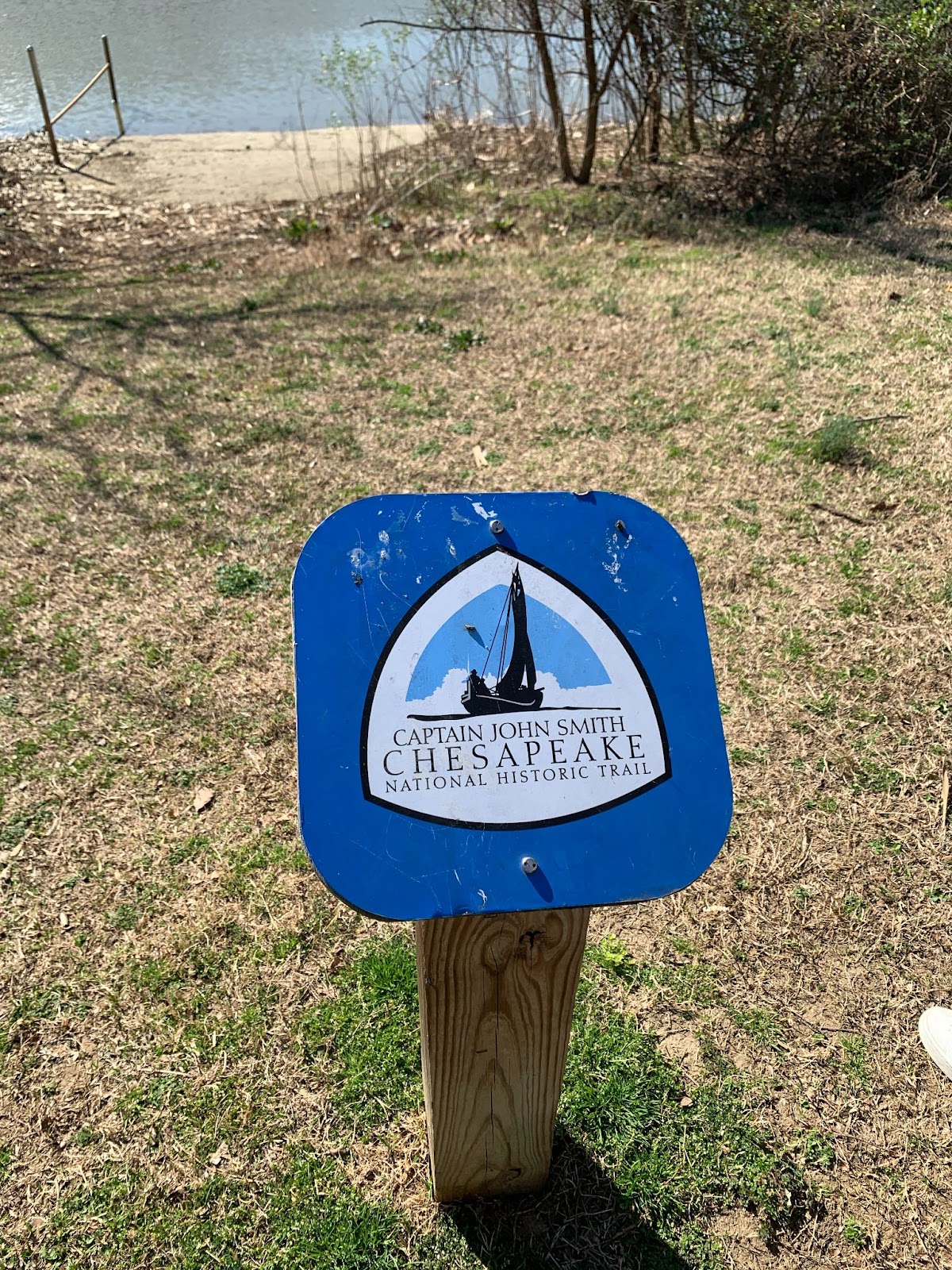 The park is part of the Captain John Smith Chesapeake National Historic Trail, a place where Smith traveled, documented the layout of lands, and mapped tribal areas. Despite this, there is nothing commemorating Indigenous Peoples who may have occupied this particular space. Though situated on a body of water (a resource Indigenous Peoples would have utilized sustainably), there is only a singular plaque detailing port occupation dedicated to colonial pursuits. 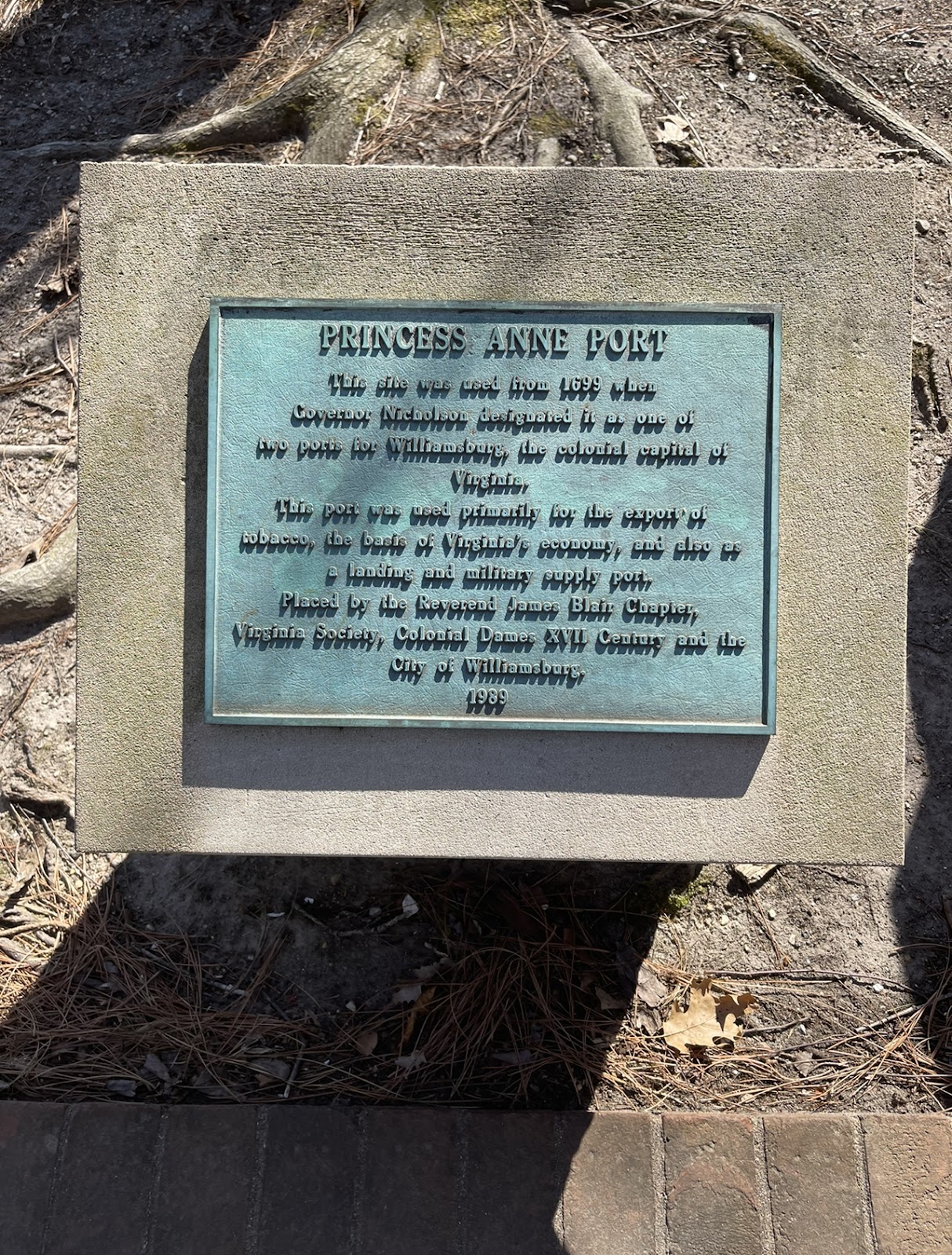 At the top of a lookout point, from where when can see a view of the park almost in its entirety, is a plaque documenting the “history” of the location which reads: “This site was used from 1699 when Governor Nicholson designated it as one of two ports for Williamsburg the colonial capital of Virginia. This port was used primarily for the export of tobacco, the basis of Virginia’s economy and also as a landing military supply port. Placed by the Reverend James Blair Chapter, Virginia society, Colonial Dames XVII Century and the City of Williamsburg 1989.” It is clear that the dominating force in this park is colonial in nature, as this colonial history is all that is deemed worthy of noting.

One thought on “College Landing Visit”