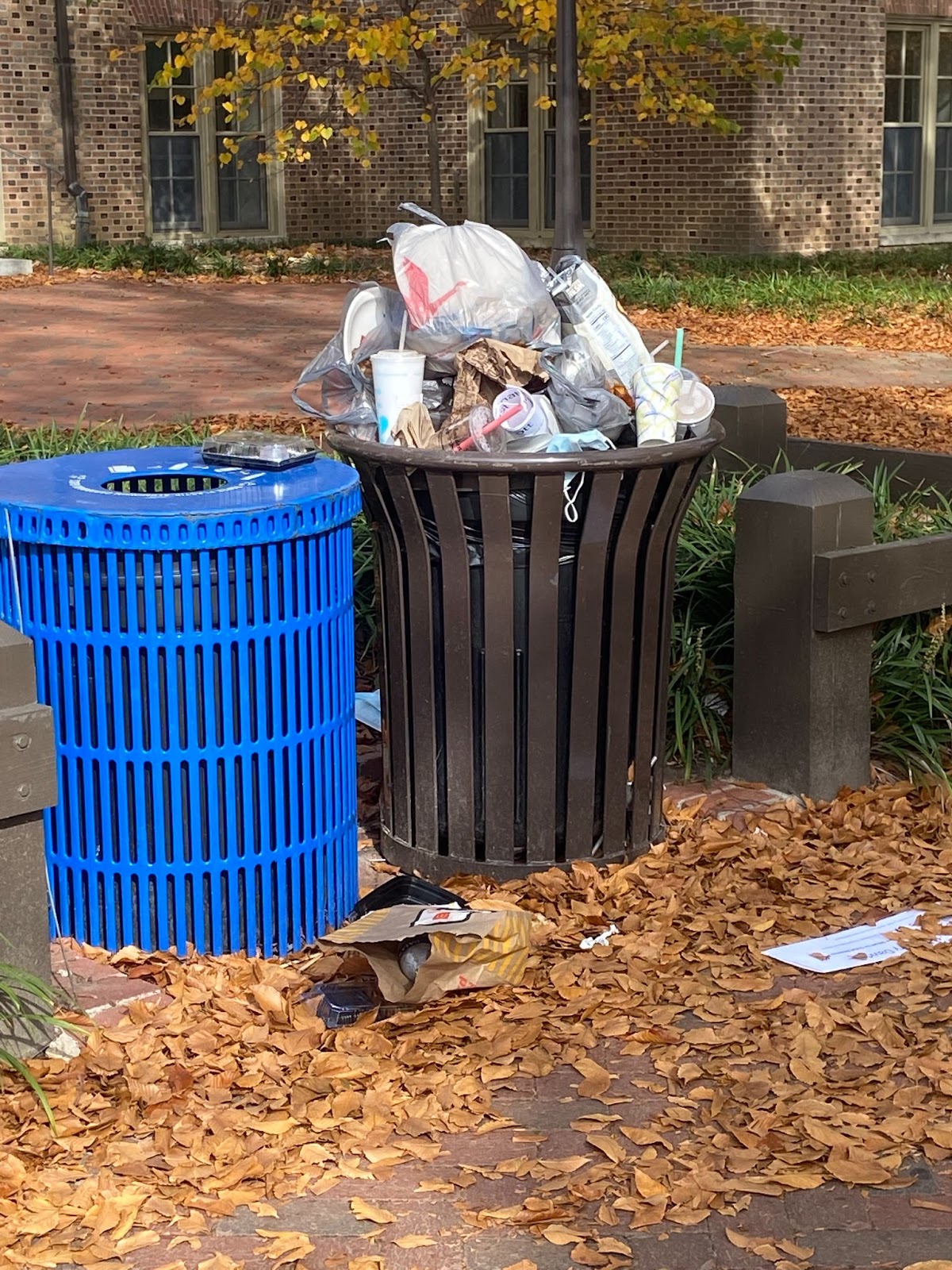 Image of Overflowing Trash Can at the Sunken Garden. Photo by Author.

Sitting outside on one of the many benches that lined the Sunken Garden, the main quad at The College of William and Mary, I saw many people taking advantage of the abnormally warm November afternoon. I saw students taking a break from their studies to enjoy the autumn leaves on the trees that line both sides of the Sunken Garden and families posing for pictures. I smiled as a small dog with floppy ears approached me. His owner invited me to pet George and he told me that they walk Sunken Gardens every weekend to get their daily exercise. As we said our goodbyes, I couldn’t help but wonder why these people would continue to walk the Sunken Garden despite the trashcans overflowing with weekend leftovers from WaWa and Chick-fil-a. I also found it telling of our culture that the recycling bins weren’t overflowing, much less filled. Did people not understand they could recycle the drink cups from their weekend outings? 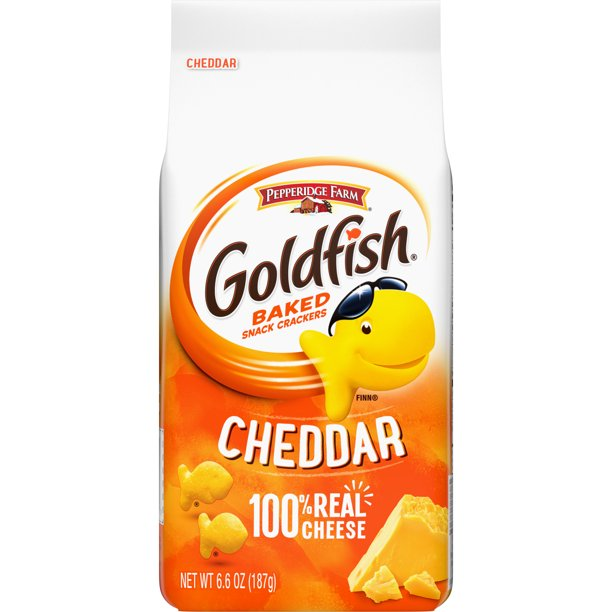 While asking myself these questions, I spied a goldfish snack bag a few feet away from a trashcan and assumed no one would pick it up to throw it away. I resolved to throw it out myself once I was finished with my observation. To my surprise, however,  a girl that had walked by me while I was thinking to myself, turned around and ran to pick up and throw the tattered goldfish bag into the trashcan. I was so shocked that I didn’t stop to ask her questions. After she left, I realized that my presence on the bench may have influenced her action, but I highly doubted it since many others ignored the smiling goldfish cartoon on the bag.

After a stroll into Colonial Williamsburg (CW), I returned to see a service worker taking out the trash. When I walked by the bench I sat on earlier, I saw the same tattered bag with a smiling goldfish cartoon looking up at me from the grass behind the trashcan. The girl who threw away the bag, and I, had fallen into the false promise of trash cans: the promise that our trash would be disposed of properly and not pollute the Sunken Garden. I couldn’t help but think about how trashcans absolve us from any responsibility for our trash; how we so willingly let the trashcans overflow because of this promise; how trashcans make our trash invisible; how we normalize and naturalize trash.

Naturalization, as Seth M. Holmes (Holmes, 2013) discusses it in migrant worker oppression in California, is the act of desensitizing ourselves and moralizing anomalies. Similar to how Holmes argues we have become anesthetized to migrant worker hardships, we have become numb to our trash. He writes “we misrecognize oppression as natural because it fits our mental and bodily schemata through which we perceive it” (Holmes, 2013, 2). Overflowing trash doesn’t phase us we are accustomed to overflowing trashcans disappearing by the beginning of the week. It’s convenient to throw our trash (and responsibility for it) away and forget about it.

“we misrecognize oppression as natural because it fits our mental and bodily schemata through which we perceive it” (Holmes, 2013, 2)

We aren’t concerned about messy trashcans because there is security in the mess being temporary. Holmes also writes about Pierre Bourdieu’s “symbolic violence” as “the naturalization, including internalization, of social asymmetries” that “acts within the process of perception, hidden from the conscious mind” (Holmes, 2013, 2). From this perspective, I can see trashcans as symbolically violent since they simplify our waste management responsibilities to putting our trash in the trash can which passes on the responsibility of removing our trash to someone else. Normalizing this bare minimum responsibility for our waste is problematic as it removes us from the impact our waste has on the environment. Our ignorance, as Catherine Alexander and Patrick O’Hare write, fuels the battle between local residents against corporate polluting (Alexander and O’Hare, 2020, 19). On a larger scale, our ignorance and limited knowledge of tracking and measuring industrial waste further make it invisible and make us bystanders in global environmental damage.

If you walk away from William and Mary you will find yourself in a small but bustling town called Colonial Williamsburg (CW). You will feel the buzz of excited families zipping in and out of the many shops that make The Duke of Gloucester Street. You will see tourists crowding around actors in period clothes relaying “the colonial experience” of 1693 when Williamsburg was first chartered. Williamsburg wouldn’t receive its name, until 1699 when the Virginia Assembly relocated Virginia’s capital to Colonial Williamsburg. While walking through CW I couldn’t help but notice how, unlike the Sunken Garden where trashcans lined the perimeter, there were only a few and far between. Moreover, the trashcans in CW were not overflowing. Furthermore, the trashcans that were present, were either not as clearly labeled or not in as plain view as they were in the Sunken Garden. From these observations, I believe that our relationship with our trash changes based on the place we are in and vice versa. 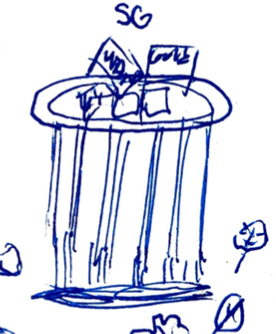 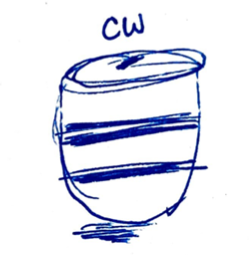 Sketches of both trashcans by the Author in the Sunken Gardens (SG, left) and Colonial Williamsburg (CW, right)

Like CW, the Sunken Garden is also rich in history. As you walk the length or the width, you may come to appreciate the year-long work that the Civilian Conservation Corps Camp put into constructing it (1935 -1936). Under President Franklin Delano Roosevelt’s New Deal Program during the Great Depression (1935 – 1936), local Americans were given the task of “beautifying” William and Mary.

Doreen Massey (Massey, 1955) writes how the identity of places is bound up with the histories that are told of them and how the histories told determines which ones are dominant. In her example of the Wye Valley, she writes how inhabitants’ “view of the place, conditioned and manifested… their decision to move there” (Massey, 1955, 185). In the same vein, our (historical) view of CW and the Sunken Garden may influence the decision to line the Sunken Garden with trashcans and only have a few (though hidden and sometimes) poorly labeled ones in CW.

I discuss the histories of both places above because history is important in understanding places as they are “constructed so as to confirm the views and convictions of the present” (Massey, 1955, 186).  In observing the number and treatment of trashcans in CW versus the Sunken Garden, I noticed how the history of these places explains their relationship with trash and may also play a role in gendering these spaces.

How History Prevails in Gendered Places

The Sunken Garden’s double tree-lined path around its perimeter and its expansive lawn give it an air of nature while CW’s bustling streets and inviting storefronts are perceived as closer to culture because of its touristic/ capitalistic surroundings.  Sherry B. Ortner’s analysis of nature-culture relations in conjunction with women suggests that “[t]he secondary status of woman in society is one of the true universals, a pan-cultural fact. Yet within that universal fact, the specific cultural conceptions and symbolizations of woman are extraordinarily diverse and even mutually contradictory” (Ortner, 1972, 67). While my observation is not like Ortner’s, applying her mode of analysis enables us to see how the Sunken Garden as a symbol of nature, and how CW as a symbol of culture affects our relationship with trash.

“While my observation is not like Ortner’s, applying her mode of analysis enables us to see how the Sunken Garden as a symbol of nature, and how CW as a symbol of culture affects our relationship with trash.”

Ortner writes how symbolizations of women can be “mutually contradictory”, I believe places, like the Sunken Garden and CW also illustrate contradictions. Here, I would like to connect back to Massey to establish that the Sunken Garden is symbolic of nature. It was constructed to be a place to sit, relax, or play out in the sun- a place to cultivate one’s life away from the hustle and bustle of work. From its history, we can understand our present. Currently, our William and Mary community along with most of society is acutely aware of climate change and therefore has an overwhelming need to protect nature. More trashcans are plainly in view around the Sunken Garden because it is perceived as symbolic of nature. However, this symbolism perpetuates the weekend overflowing of trashcans. Ortner suggests that perceiving nature as feminine explains its exploitation. Since her paper’s publishing date (1974), attitudes toward nature have changed, but I argue that exploitation has learned to camouflage itself within the “save nature” movement. For example, the large number, almost excessive number of trashcans that clearly line the Sunken Garden creates the false promise of trashcans; a promise I fell for as well as the girl with the goldfish bag. Could it be that an increase in the number of trashcans and recycling cans in places symbolic of nature only contributes to this lie and in turn backfire on our desire to mend our relationship with nature?

In contrast, I didn’t see many trashcans in close proximity to each other in CW. In fact, the trashcans were not as clearly labeled as they were in the Sunken Garden nor were they accompanied by a recycling can. I wonder if tourists even knew that the barrels in some areas of CW were aesthetic trashcans. I believe that the lack of trashcans and poor labeling move people to discard their trash elsewhere since there is no (obvious) way to dispose of it properly. I also believe the societal pressure to keep CW clean for tourism to thrive is an example of masculine and paternalistic culture.

Again, I call back to my description of CW’s history: Williamsburg was erected during the time period when men dictated many things and were in charge of building a new nation, CW was/is a patriarchal center. Now, CW commodifies that history to tourists and feeds into the patriarch’s offspring: capitalism. Carolyn Merchant writes extensively about how the mechanization of nature “sanctioned the management of both nature and society” and permitted men to ”deploy entrepreneurial power over men and patriarchal power over women and children”. CW as a symbol of touristic culture only prolongs the mechanization of nature in that capitalism grew from turning nature into an “economic resource, stripped from its core values, turned into a machine in the service of men, a market worthy of man-made regulation”. Moreover, trash generated from CW ends up in the trashcans around the Sunken Garden because they are more clearly labeled. The Sunken Garden is simply a landfill for CW. From this perspective, it’s difficult to say we treat our trash and our places equally.

“The Sunken Garden is simply a landfill for CW. From this perspective, it’s difficult to say we treat our trash and our places equally.”

From Holme’s discussion on naturalization and symbolic violence to Massey’s construction of places as temporal and spatial to Ortner and Merchant’s discussion on gendered inequalities, it’s not difficult to see how the places and their histories around us influence our actions and vise-versa. Even the small things like throwing out our trash are part of this feedback loop of perception. There is a gap that divides nature and culture, and in that gap, trashcans grow as a form of symbolic violence, systematic asymmetries thrive, and our relationship with nature and each other weakens. To close the gap would mean revising the hurtful aspects of our perceptions of the places around us; only then can we break the feedback loop that sustains our asymmetric world.